BE THE FIRST TO KNOW

Subscribe to the DuoDuo-Mellower newsletter to receive timely updates from us.

The paper clip is a nearly ubiquitous device, used worldwide to temporally hold papers together. The technology for manufacturing paper clips evolved in the early years of the twentieth century, and has remained virtually unchanged since the 1930s. Paper clips come in several forms, but the one most often seen in common use is called the Gem clip. The origin of the term "Gem" is supposed to have originated from a British firm that began exporting them at least as early as 1907. The term has come to stand for the iconic shape of the oval-within-oval design. Any clip of this shape is called a Gem clip, regardless of the manufacturer. Another type of paper clip sometimes used by archivists and librarians is called the Gothic clip. It has a rectangular shape, with a triangular inner loop. Other distinguishing marks of paper clips are the overall size, the thickness, and quality of the wire, and whether the clip is corrugated or smooth. Most paper clips in the United States are made domestically by a few firms that specialize in their manufacture. These manufacturers put out roughly 20 million lb (9 kg) a year of paper clips.

The paper clip evolved to fill a specific need. A large amount of paper could be bound into a book in order to hold the leaves together. Binding was not a viable solution to keep together a few sheets, such as a short set of records or receipts. Though paper was invented in China sometime in the first century A.D. , and was widespread in Europe by the thirteenth century, people made do without anything like the modern paper clip until the end of the nineteenth century. People used two general methods to fasten together a few sheets of paper. They could slit the pages in the corner, making two short parallel cuts. Then ribbon or string could be threaded through the slits, the ends tied and often sealed with wax. The second method was to take a common straight pin and pin the sheets together. Machinery to make cheap and uniform quality pins developed early in the nineteenth century. Business people bought boxes of loose pins, sold by the pound and called "bank pins," to use in offices. Both the slit method and the pin method had the same drawback: the paper had to be pierced. Pin holes caused less wear on the paper than slits, yet if pages needed to be unpinned and repinned many times, the pinned corner was subject to a lot of wear, leading to the drooping "dog ear." Pins also had the disadvantage of being sharp enough to prick fingers and tended to rust if left in place for any length of time.

Designs or patents for early paper clips date to the middle of the nineteenth century, but none of these early devices seem to have worked well enough to have made a lasting impression. Some of these were closer in form to what is known today as a binder clip or bulldog clip, and others enfolded the entire corner of the paper within teethed overlays of thin metal. This type of paper fastener was made from stamped sheet metal. Wire forming technology advanced in the mid-nineteenth century, and from about 1870 on, paper clips of various designs competed in Europe and the United States.

The earliest recorded patent for a paper clip was granted by the United States Patent Office to a Pennsylvanian, Matthew Schooley, in 1898. Schooley's patent application mentions other devices already on the market of a similar design, so it would not be accurate to name him or any other individual as the father of the paper clip. A Norwegian, John Vaaler, is often credited with inventing the paper clip in 1899. His patent application included several possible paper clip shapes, including one that is similar to the modern Gem clip. Because of Vaaler, the paper clip became a symbol of Norwegian nationalism during World War II. There is even a 23 ft (7 m) high statue of a paper clip in Norway. It was set up to commemorate the solidarity the Norwegiansrepresented against the Nazis by pinning paper clips on their lapels.

A Massachusetts inventor, Cornelius Brosnan, received a patent for a paper clip design in 1900. Again, his application spoke of the product as an improvement over other paper clips already in existence. His clip was marketed as the Konaclip. The Konaclip was an oval loop of wire with an inner arm terminating in a rounded eye. At least these three clips, the Schooley, the Vaaler, and the Brosnan designs, existed by the turn of the century. In 1899 a Connecticut inventor, William Middlebrook, applied for a patent for a machine to make paper clips. Middlebrook's patent application was not for making any particular type of clip, but the one pictured on the application's illustration looked like the archetypal Gem. Gem clips were imported to the United States from England by at least 1907. The Gem was advertised as a fine English product, superior to all others. Though paper clips of differing designs continued to be made for several years, by about the mid-1930s, the Gem had become the most commonly used.

Paper clips are generally made from galvanized steel wire. The wire diameter depends on what size and quality clips are being made from it. Paper clips can be made from light, cheap steel, or from better quality steel, depending on the manufacturer. The material used, however, has to fall within certain physical parameters to make satisfactory paper clips.

The Gem clip is often held up as a paragon of modern design. It is simple, elegant, and surpassingly functional. Yet leaving the iconic shape aside, a paper clip designer must consider a host of mechanical and engineering questions. The material used to make a paper clip must possess certain properties. The wire needs to be stiff enough to hold its shape in use, but not so stiff that it is difficult to open. Engineers also consider a quality called yield stress when designing a paper clip. Yield stress is the amount of stress needed to permanently reshape the wire. If the wire has too low yield stress, it will stay bent open and not hold the papers tightly. Engineers also must consider the cost effectiveness of the material used. Using a cheaper, thinner wire may save the manufacturer money. Yet the material must also perform well in the manufacturing process, not leaving sharp burrs at the cut ends and resisting cracking or breaking. The material used also should be non-corrosive. The finished appearance of the clip is also a design consideration. The clip can have various finishes, smooth or slightly serrated, shiny or dull, and it can be made in many different sizes. So even though the basic Gem design has survived primarily unchanged for about a hundred years, manufacturers still confront design and materials options when making new paper clips.

The manufacturing process for paper clips is fairly simple, using a specialized wire forming machine. Moreover, the process has not changed much since the 1930s. 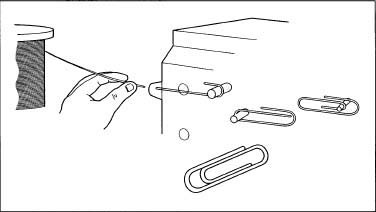 The simple threading of a paper clip machine.

paper clip machines may be operating at once. Automated controls allow one worker to monitor dozens of machines.

Quality control is not a particularly important issue in paper clip manufacturing. Visual inspection of the product is enough to identify a problem with the process. No special tests are needed. The manufacturing equipment must be maintained in order to work properly. Some machines still in use today in the United States were built in the 1930s or even earlier. Trained workers check the equipment for wear and defects that might affect the quality of the finished clips.

Though paper clips are re-usable, many are thrown away. Some office paper recyclers ask that paper clips be removed before paper is put in recycling bins. Some recyclers use metal detecting equipment that can separate out staples and paper clips, so this material can be recycled separately. One paper clip industry study estimated that the vast percentage of paper clips were never used as intended—to hold paper—but were bent and destroyed by people, used as cleaning or prying instruments, etc. Since paper clips are inexpensive, both to manufacture and to buy as a retail item, most are not re-used or recycled but simply thrown away.

The Gem clip has held sway against other contenders in paper clip design for a very long time. All-plastic paper clips came on the market in the 1950s, to some success, followed by plastic-coated clips. In the 1990s a Pennsylvania company began marketing what looks like essentially a giant Gem clip, which can hold more than one hundred sheets of paper at one time. None of these developments differs markedly from the turn-of-the-century design consumers are so familiar with. This leads to the question of whether the Gem clip is already a perfect design, thus leaving no room for improvement.

Where to Learn More